What is the average IQ score?

IQ tests are designed to measure the Intelligent Quotient (or the intellectual level) of an individual and express it in a number. The great majority of these tests use 100 as the average IQ score for the general population. This value is the main reference point of every IQ test. Therefore, IQ scores are not an absolute measure of intelligence, but rather a ranking system that lets the person know how their intelligence ranks in comparison to their peers. 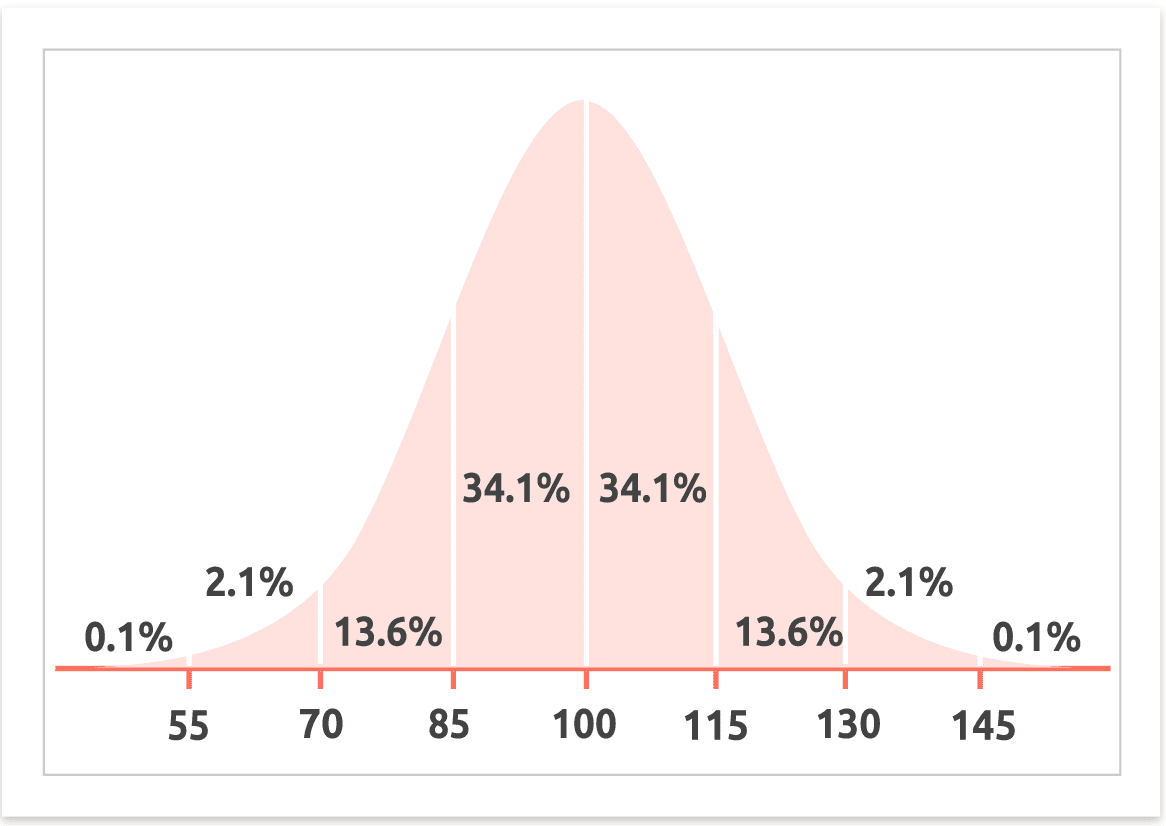 How are IQ scores calculated?

The content and purpose of IQ tests have changed considerably over time, but their scoring system has been more or less consistent. They are normally scored in one of two ways.

The first method is based on the individual’s age. The person’s mental age is divided by their chronological one and then multiplied by 100. The second method, which is the most currently used, is based on a process of standardization. The same test was administered to a representative sample, taking into account age, culture, and education, and its score was used to establish a standard average IQ score for the general population.

Despite the differences in approach, both methods agree with setting 100 as both the mean and the average IQ score, with a standard deviation of 15 to conform to a normal bell-shaped distribution curve.

About 68% of scores fall between 85 and 115, meaning that they fall within the standard deviations of the average IQ score. This percentage increases to 95% for scores between 70 and 130. Due to this high percentage, some intelligence scales also classify the scores between 70 and 85 as low average and those between 115 and 130 as high average.

The distribution curve of IQ scores also shows that only a small percentage of people achieve a score over 130 or below 70. Whereas scores over 130 indicate giftedness, those under 70 may be an indicator of a learning disability or a developmental issue.

What do IQ tests measure?

There are different types of IQ tests, but most of them are designed to measure crystallized and fluid intelligence. Crystallized intelligence refers to knowledge and skills that an individual acquires in the course of their lives, while fluid intelligence is the same as general cognitive ability, that is, one’s ability to reason and think logically, recognize patterns, draw inferences and learn new things.

To measure these types of intelligence, IQ tests are divided into subtests or sets of exercises designed to evaluate specific skills. Most tests include exercises that measure verbal skills, concentration, visual-spatial processing and math, reasoning skills, and memory skills. Each subtest can also be administered individually.

Why IQ tests are not an exact science

The average IQ score of 100 is the product of a standardization process. All IQ test results are an estimate of someone’s intelligence by comparison to others. They cannot be an accurate measure as several factors can influence those same results.

For instance, as previously mentioned, an IQ score lower than 70 may be an indicator of a learning disability or a developmental issue. These are two very different issues that the test cannot ascertain.

In the case of a learning disability, it implies that the individual has a standard fluid intelligence but might have a cognitive problem retaining and learning new information. This does not make him or her less intelligent than the others, but rather that they might require a different learning approach or support to develop their crystallized intelligence. Therefore, their IQ results may be a fallacy as the test was not designed to take into account such pitfalls.

Different countries have different average IQ scores. For example, the average IQ in the United States is 98, while Singapore and Hong Kong have the highest IQ scores with 108. By contrast, the average IQ is lower in less developed countries. In Cameroon, the average score is 65, in Mozambique, it is 64, and in Equatorial Guinea, it is 59, for instance.

These results have led to several controversial opinions within the scientific community, with some researchers defending the eugenics (and, thus, racially-biased) explanation for these differences.

However, due to the way IQ tests are designed, the great majority of researchers agree that race and gender do not have a significant role in influencing these results. Rather, factors such as educational access and background, health, culture, nutrition, and the environment have a much stronger role and influence. Furthermore, these factors are intertwined and directly affect both crystallized and fluid intelligence.

Someone with easy access to education or with an academic background is likely to have superior crystallized intelligence. Good nutrition and health lead to a healthier body and brain, enhancing their performance. A peaceful and safe environment is also essential for a good cognitive performance. And culture plays a role in promoting or hampering curiosity and learning, and even in the way reality is perceived.

The importance of these factors is also frequently used to explain the increase of average IQ scores in many parts of the world since 1900. Notability, access to formal education and general information has increased since then, as well as vaccinations, nutrition, and healthcare.
This phenomenon is also known as the “Flynn effect”, after James Flynn, the scientist who first took notice of these changes.

Is having an average IQ is a bad thing?

Not at all! The reason why it is average is that the great majority of people have this IQ level too. Most doctors have an average IQ, most professors, teachers, talented artists, scientists, inventors, people with incredible knowledge and intellect, that are masters of their craft and exceptional in what they do. Having an average IQ did not prevent them from being successful and does not diminish their accomplishments in any way.

Having a high IQ does not equal success in life. It only means that the person can perform well in the evaluating tasks. However, there is much more to life and an individual than what is analyzed in an IQ test.