Our free IQ test is based on Raven's Progressive Matrices, a nonverbal psychometric test that measures abstract reasoning and general intelligence. It is mostly geared towards the measurement of fluid intelligence, a type of intelligence that refers to the ability to draw inferences, think logically, recognize patterns and learn new information.

As it is a nonverbal test and relies solely on visual analysis and abstract and logical thinking, it can be applied to a large group of people to compare the results in a more accurate way. 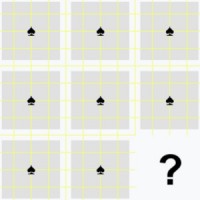 This IQ test has a time limit of 20 minutes and a total of 25 questions of multiple choice. The results of the test will be provided immediately after finishing it.

Each question will present a grid with 8 squares containing a pattern or a sequence. The test-taker will be asked to complete the grid by selecting the 9th square that should replace the question mark. Select only one option per question.

The questions will become progressively more difficult as the test-taker advances.

After finishing the test, test-takers will be asked about their gender, age, nationality, education level and the reason for taking the test. This data will be used to refine the results and measure the IQ of the test-taker against individuals belonging to the same group.

IQ, which stands for Intelligence Quotient, is a type of score that expresses someone’s intelligence in a number. This number is calculated through tests that measure the person’s ability to solve problems, reason, and to recall the necessary information to perform certain tasks.

IQ tests evaluate 5 main skills: concentration, logic, visual, memory, and verbal skills. They can measure together or individually. All tests are time-limited to also assess how quickly the person can perform the tasks at hand.

The test results are always an estimate and there is a margin of error that people should take into consideration. They can be a good indication of how well a person can perform a certain job or how well kids can do in school, but there are external factors that prevent it from being an exact science. For instance, factors such as age, level of education, and even the environment in which one takes the test can influence the final result.

What is an IQ test?

It is a psychometric test designed to measure a person’s intelligence and express it in a number. The IQ value is calculated by comparing the results of the test-takers with those of a group with the same characteristics (education level, age, nationality, and gender).

The type of the test and the method used to measure and calculate de IQ can vary depending on the intelligence scale used. Nevertheless, the great majority of these scales accept the number 100 as the average IQ for everyone. To find this number, the researchers applied the same test to a large and diverse group of people worldwide and calculated the median of the results.

IQ tests can evaluate a specific skill and/or type of intelligence or they can have a wider scope and include questions that touch upon a larger number of cognitive skills. As a general rule, they are designed to measure 5 sets of skills: memory, visual and spatial reasoning, logical thinking, verbal reasoning, and concentration.

Several methods can be applied to calculate the IQ. However, most of the currently accepted, set 100 has the average score for everyone. This number was obtained by applying the same test to an extensive and diverse group of people worldwide and then finding the median of the results.

Therefore, IQ scores let the person know how their intelligence ranks in comparison with other people.

IQ test scale: what is a good IQ score? 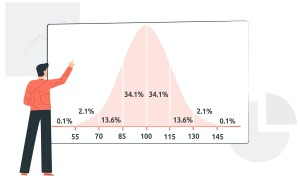 As the average IQ score is 100, any result above that value is already a good score.

The meaning of the results can vary depending on the classification used. For example, the Wechsler Adult Intelligence Scale and the Stanford-Binet test assume that the scores falling between 90 and 109 can be considered also as average IQ scores, as it takes into account a possible margin of error. The same systems also classify scores between 80 and 89 as low average IQ scores and those between 110 and 119 as high average.

Regardless of the classification or method applied, most people normally score between 89 and 115. And, overall, only 2% of the test takers can score above 130. If you are within this 2%, it means your intelligence is clearly above that of your peers. Meanwhile, anyone scoring above 140 on an IQ test is already considered to be at a genius level.

Taking an instant IQ test online is a quick method to assess your IQ and satisfy your curiosity about how your score compares with that of your peers.

As they are available 24/7, they also have the added advantage of letting you choose the most suitable moment and the best environment to take it, as to avoid any distractions or external factors that may hinder your results.

And if you are simply looking to practice your reasoning and problem-solving skills for fun, they are also a great method to put them to the test. Plus, our IQ test lets you find out how well you performed right away as you get instant results, with no email or registration required.

Does practicing for an IQ test work?

It depends on your goal. If you want to simply increase your final score on an IQ test, then it works. If, however, you wish to effectively improve your IQ, that is, your intelligence levels, then it only works to a certain extent.

By practicing, you get to know what to expect. It allows you to know the types of questions you may be facing, their wording, and tricks. You get to learn the patterns of these questions, and what to look for, or which strategies to use depending on the situation.

Practicing will not give you the answers for when you take a real test, but it will provide you with all the tools you need to perform well on it.

That being said, there is some debate over if practice will increase your IQ or not. The general consensus seems to be that it does affect the brain positively in some ways, but the results of the test will be inflated compared to what the real value would be.

IQ tests are designed with the intent of catching the test-taker unaware, forcing them to use their intelligence skills to understand the questions and reason their way to the solution. However, practicing provides test-takers with some sort of rough map of the test. They still need to figure out the answer by themselves, but the “map” already hints at the course they should take.

Evaluates inductive reasoning and verbal skills. You will be given short texts that you will have to read and interpret to then demonstrate that you understand the information conveyed.