Spatial reasoning is the activity of trying to perceive and copy an object / shape and establish what would it look like if it were rotated by a certain angle1.

This ability seems to be a predictor of the successful solving of construction tasks in children2, but it is also a key element of certain jobs like airplane pilots3.

For each question, you will be given a 3D base image that you must mentally rotate and analyze. You will have to select all the options that are a rotation of the given image. Each question can have more than one answer. 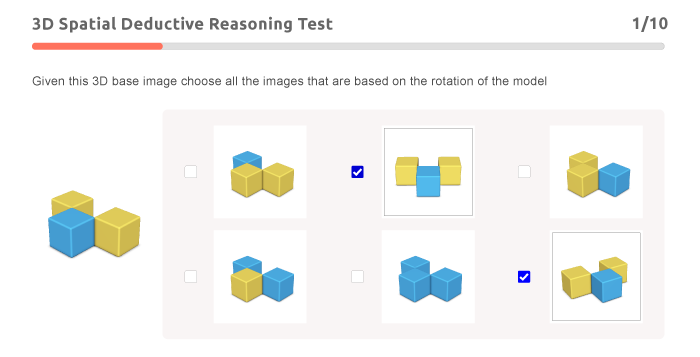 Spatial reasoning tests assess the ability to mentally manipulate objects. In other words, they assess the capacity to create a mental image of an object and the ability to rotate, move it and visualize how their shape and patterns can change depending on the perspective they are being looked upon.

Spatial reasoning requires logical thinking, but no previous knowledge. It is a skill that can be trained, but not something that people can learn through books or by building upon intellectual knowledge. However, it is a fundamental skill in many situations. For example, people with developed visual and spatial abilities are traditionally better at math.

We also use this skill daily, even if we are not aware of it. For instance, when seeing two shoes lying on the ground, you can normally tell which one goes on the right foot and which one goes on the left. That is because your brain was able to transpose them into a mental image and rotate them to a different position in which it became easier to identify each one. Other activities in which you use this reasoning skill include finding your way through a mall with several floors or packing a suitcase.

3D spatial reasoning tests use 3D images in their questions and require the test-takers to mentally analyze said images to then point out which of the possible answers represent a rotation of it. This method is shared by all tests, regardless of the publisher.

However, some variations may be added. For example, there can be only one or several right options among the answers. The shapes of the objects may also vary considerably.

Studying for a test can thus be hard. Training this skill is very important if you want to succeed, but some universal tips can help you get a good grade on a spatial reasoning test.

The objects presented in these tests always have an anchor point, that is, a pattern, color, spot, or shape that stands out in the image. As the name indicates, the anchor point is there to help you "anchor" the mental rotation and perspective of the object. It serves as a reference to analyze all the sides of a 3d object in relation to that point.

When doing a test, try to look for this point right away. If it is not immediately obvious, look at the possible answers. Through the choices available it can be easier to figure out what particular detail is being used as the anchor for the image.

Look at the image from a mere logical perspective and methodically analyze every part of it. For example, how many sides does it have? Is there anything inside it or neighboring it? What shapes is it made of? Does it have colors and, if so, which?

Try to identify what is uniform and constant even if you rotate the image. Shapes and colors are particularly important to find these patterns. Once you understand what cannot be changed, you know that you need to mentally focus on the other aspects of the image and how they interact with the constants.

For example, in the example question above you can see that the constant is the shape. No matter how you rotate the image or look at it from different angles, the shape will bring you no surprises. Thus, the colors are the key to solving it.

Combine the patterns - the constants you have found - with the deconstruction of the image, and go look into the possible answers for the question. Most likely, this simple information will help you dismiss some options right away, without even having to dive into the different perspectives of the image.

Removing these wrong options will increase your chances of having the question right. Then, it is up to the hard work. Create a mental image of the object, find the anchor point, and begin rotating it in your mind while comparing it to the remaining possible answers.

Assesses the ability to recognize and memorize faces using a sequence of photos of individuals with different facial expressions, hairstyles, and clothing.