Reasoning about relative properties of physical systems such as the direction of motion, relative speed, and relative mass is a powerful strategy to assess one’s ability to create mental simulations in order to evaluate physical events.

This kind of test taps into a person’s ability to access their mental models, learned rules or cached results to generate solutions to a problem1.

In the following test, you will be shown images portraying objects that can mechanically interact with each other. All the questions will relate to how these objects would react in real life.

Scale - On a perfectly balanced scale, you have one plate with two weights, one with 10 Kg and the other with 5 Kg. If the plates are balanced, how many Kg are in the second plate? The answer is 15 Kg, otherwise, the plates would tilt.

Gears - If you have only two gears connected (without any belt pulley system) and you know that one gear turns counterclockwise, in which direction does the other gear rotate? The answer is clockwise, as connected gears rotate in opposite directions. 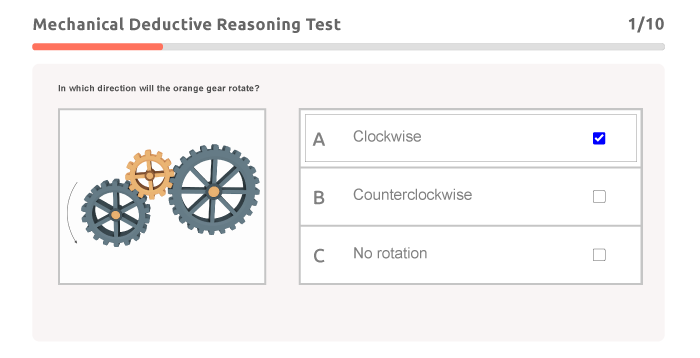 What are mechanical reasoning tests

Their goal is to evaluate the ability of the examinee to understand the mechanical behavior of certain objects when they are subjected to elementary physical principles such as forces, gravity, movement, speed, friction, among others.

In addition to understanding the principles of physics behind the exercise, the ability of the examinees to understand how the parts interact with each other based on the whole and the global vision of the mechanism is also evaluated.

Tips and tricks to solve a mechanical reasoning test

Study the basic principles of physics

For that, there is no other way than to study them. Learn or refresh your memory about how principles like force, speed, gravity, weight, mass, volume, etc. work and are calculated. It is advisable that you keep in mind basic mechanical principles such as, for example, that in a gear system, two connected cogwheels rotate in opposite directions.

Learn to interpret the images

Do not try to find hidden meanings in the images or interpret them creatively. The important thing is that you focus on the details that directly affect the principle or mechanism that you are analyzing. Everything else is there only for reference or to confuse you.

Focus only on answering the question

Do not complicate the exercise. If you are asked to indicate the weight, speed, or direction in which a mechanism rotates, your focus should be on those principles of physics.

Unless otherwise stated, ignore all other details such as the strength of the material, its natural weight in real life, air resistance to movement, etc. The reality is, to increase the difficulty of the exercise, it is normal for the question or the images to include more details than necessary.

Remember that the goal of this type of test is to assess the ability of the examinee to understand the mechanical principle in the question, which includes knowing how to distinguish between important and irrelevant data.

This test evaluates visual memory and concentration. A grid partially colored will be shown for five seconds and the test-takers will then be asked to point out the position of the colored cells.