Inductive reasoning can be defined as the systematic and analytic comparison of objects in order to detect similarities and/or differences among them with respect to attributes or relations1.

Although not sporting numbers per se, numeric abstraction inductive thinking is assessed in this test.

Abstract non-symbolic numerical representations are important in assessing IQ because they can provide the evolutionary and developmental foundation to mathematical thinking2.

This test has 10 questions in total. In each, you will be shown a sequence of figures.

You must understand the sequence and complete it by choosing the figure that should replace the question mark. 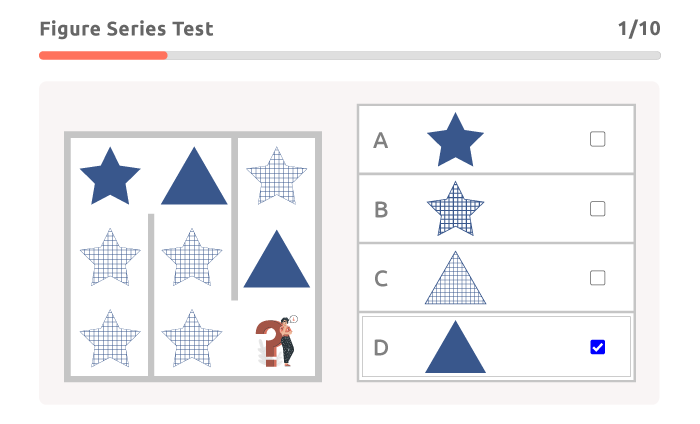 How does this Figure Series Test work?

This test is designed to assess inductive reasoning but also the test-takers’ concentration and attention to detail. The method employed is very simple but also insightful.

The test-takers are expected to be able to recognize different shapes and identify what makes each figure unique. Following this introductory analysis, they will have to find the pattern in the sequence and use it to predict which figure comes next or which one is missing.

This test is focused on inductive reasoning precisely because of this need to make a prediction. This type of reasoning refers to the ability to analyze general information to draw a particular conclusion that may or may not be right. Its validity will depend on further data.

In the case of this test, the test-takers will have to draw a particular conclusion - which figure is missing - based on the general pattern they identify.

Pay close attention to the figures

You will not be able to correctly identify the pattern behind the sequences unless you have a good understanding of each figure. Pay close attention to their shape, what are their commonalities and differences, and if they have different colors or patterns within themselves.

This type of test tends to include figures very similar to each other on purpose, to assess the concentration skills and attention to detail.

Identify the structure of the sequence

Your first step should be to read the question carefully and check if there is any indication of the type of structure the series follows. Is there an arrow pointing to a specific direction to follow? Are the shapes arranged in a particular direction?

Inductive reasoning tests that employ series and sequences in their questions tend to repeat the same strategies regardless of the specific skills being assessed. In other words, they normally use the same type of patterns even if they are being applied in different contexts.

For example, the series may have more than one pattern intertwined and you will find a different pattern for the even and odd positions. When this happens, the sequence will seem random when analyzed as a continuum.

Therefore, it is a good idea to get acquainted with these common patterns so you can recognize them more easily and quickly.

Tests the ability to reason and to create mental simulations to evaluate physical events, by taking into consideration factors such as the direction of motion, relative speed and relative mass.

Evaluates problem-solving and verbal skills. Test-takers will face a problem (random sets of letters) and will have to solve it by detecting which sets can be reordered to create English words.

Evaluates memory and concentration skills. Test-takers will be shown a sequence of icons in quick succession and must then recall which icons were shown.