Although not sporting numbers per se, this test assesses numeric abstraction deductive thinking.

Abstract non-symbolic numerical representations are important in assessing IQ because they can provide the evolutionary and developmental foundation to mathematical thinking1.

For each question, you will be shown a 4 x 4 Latin Square, partially completed with symbols. One cell will have a question mark on it.

You must select the option with the symbol that should replace the question mark. 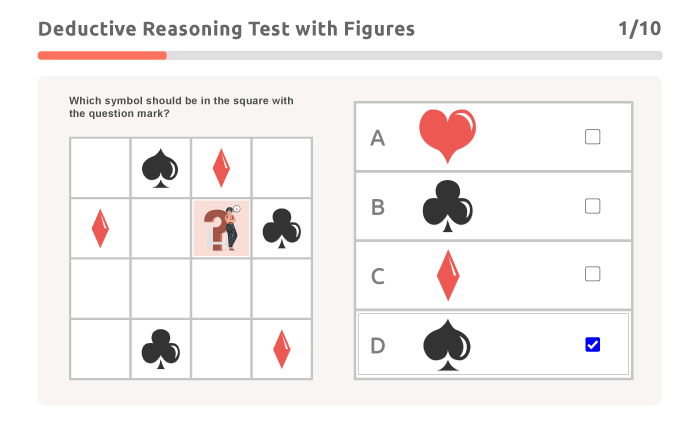 What do deductive reasoning tests with figures assess?

Deductive reasoning tests with figures add another element to its assessment since the figures also imply the use of abstract thinking. To add another dimension to their analysis, most of these tests employ Latin squares in their questions. These squares bring into the equation mathematical reasoning, even when they use abstract non-numerical figures.

The rules governing Latin squares are simple: each column and row must contain one symbol or number of each kind, without any repetitions. Sudoku, for example, is a number-puzzle based on Latin Squares.

How do deductive reasoning tests with figures work?

The questions used in deductive reasoning tests with figures follow the same principles as Sudoku, but with added difficulties. Just as in the puzzle game, the test-takers will find a partially filled Latin square for each question. However, rather than filling in all the blanks, they will be asked to point out the symbol or number that should be placed in a specific cell.

This forces them to either solve the question by hand, structuring their thoughts and rationale by using a visual aid, or to employ their memory to a higher degree. Either way, the test takers will have to use abstract thinking and deductive reasoning to find the answer. For example, depending on the placement of the filled cells, they might have to make suppositions in order to complete the question, test them and discard them when they are proven false.

Latin Squares were first developed by Leonhard Euler in 1776, as a mathematical system to be used in statistical analysis.  The Swiss mathematician and physicist combined the concepts of Latin Square - a matrix filled with letters of the Latin alphabet - with that of Magic Squares which are filled with numbers following a mathematical formula that ensures that the sum of every row and column is always the same.

In his paper titled “De quadratis magicis”, Euler used 3x3, 4x4, 5x5, and 6x6 tables to prove that, when certain constraints are applied, the principles and concepts of a Magic Square can also be attained using the Latin alphabet.

Nowadays Euler’s concept of Latin Square goes beyond the Latin alphabet. It is now known that when the constraint of filling every row and column with one item of a kind without repetitions is in place, the principle of Latin squares can be replicated using any type of symbol.