One of the ways the positive relationship between Working Memory (WM) and General Intelligence is explained is that people with high WM capacity may store in memory many elements which contribute to keeping in mind sub-results needed within a task1.

This test essentially assesses the short-term storage component of the WM system, which is a crucial element with a strong predictive power towards the assessment of general intelligence2.

For each question, you will be shown a 6 x 5 grid for 5 seconds. The grid will have colored and blank tiles. Then, a blank grid will be presented.

You will have to identify and select where the colored tiles were placed in the previous grid. 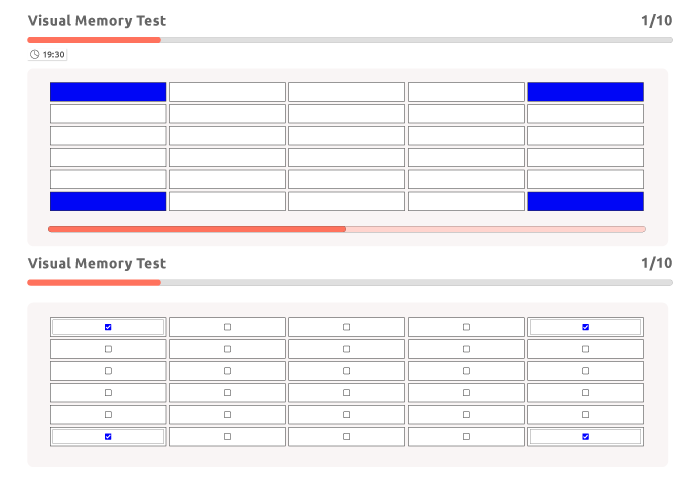 What is visual memory?

Visual memory tests are designed to actually measure the visual working memory. Unlike the long-term one, this type of memory stores small amounts of information to be used in a short span of time. Once it has been used or attention has shifted to another subject, it is completely erased. It is a process intended to avoid cluttering the brain with unnecessary information.

Visual short-term memory is of extreme importance in our daily lives, even if we are not always aware of it. For example, when you are driving, if you remember that you have a red car on your left, you are less likely to veer into its lane and crash against it. You might also remember the speed limit of the road you are on only until you find the next signal and replace it with the new information.

How does this test work?

This visual memory test assesses the limits of your visual working memory capacity, that is, the limit at which this type of memory cannot hold any more information.

To do so, each question presents for a few seconds a grid with only a few colored cells, and the test taker is then requested to point out the placement of those cells in an empty grid. The level of difficulty of the questions increases as the test progresses. The added difficulty may be the addition of more colored cells to remember, the reduction of the time the test takers have to memorize their position or a combination of both.

The position of the colored cells is randomly assigned. The goal is to avoid having the test takers finding patterns in them, which in turn would make them easier to remember.

Can you improve your visual memory?

Although it is not possible to increase visual short memory storage, it is possible to train it and, thus, improve it. It is not about the amount of information you can retain, but rather about what you retain.

Playing memory games or even word search puzzles, practicing memory tests, writing down the main events of a story after hearing or reading it, and even copying down the notes on a board even if you think you do not need it, are all good training methods.

By performing these simple exercises, you can train your visual memory to focus only on specific details and ignore others. This means that you will be filling your memory storage with precise information instead of cluttering it and occupying space with data you do not need. In other words, you can learn to subconsciously prioritize what is important and what is not.

In the case of this visual memory test, for example, training your memory might help you focus solely on the grid and the placement of the colored cells, and learn to ignore the other features on the webpage and even the time bar running down below the grid.

Tests the ability to reason and to create mental simulations to evaluate physical events, by taking into consideration factors such as the direction of motion, relative speed and relative mass.