Presenting a number sequence and asking what the next number might be is one of the most common tests in intelligence assessment because it translates one’s ability to detect an unspecified rule from a set of data, a feature that is highly associated with learning1 and learning potential2.

Inductive reasoning can be useful in many problem-solving situations and is used commonly by practitioners of mathematics3.

For each question, you will be presented with a sequence of numbers. You must select the number that completes the sequence and should replace the question mark. 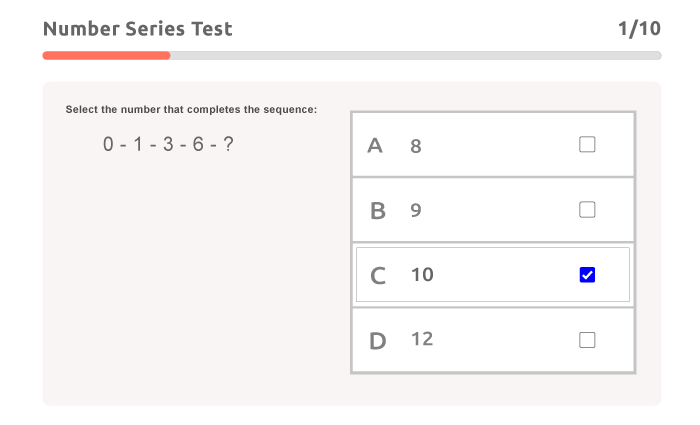 This Numbers Series Test is designed as an entertaining and educational tool. The results do not constitute a psychological or psychiatric evaluation of any kind and may not offer an accurate portrait of the mental fitness of the test taker. We do not guarantee the accuracy of the results and these should not be used as an indicator of the capacities of the individual for a specific purpose.

Monotonous series are created solely through addition and subtraction, which makes them one of the most easily identifiable patterns in any numerical reasoning test.

Nevertheless, there are variations to the basic series that can make it more difficult to spot the rule governing them. These variations usually rely on patterns not immediately perceived at first sight.

In the case of a more complex series, it could happen that the third number is obtained by adding the difference between the first and the second to a simple pattern already in place.

In this sequence the base pattern is to add +2 to the difference between the number:

Exponential series can be achieved through multiplication and division, although they might include additions and subtractions too to create a more complex series and patterns.

In simple series, the numbers are always multiplied or divided by the same digit.  Let us take the series 2 - 4 - 16 - 128 as an example. The leap from 4 to 16 and then to 128 already hints that this is most likely not a monotonous series. A closer look can tell you that each number is multiplied by itself to find the following one.

In more complex ones, the number responsible for the multiplication can change following a pattern of addition or subtraction.

For instance, you could have the sequence 2 - 4 - 12 - 48. In this case, the exponential series is being affected by the addition of one value to the multiplication at each step:

A good tip to remember in the case of exponential series is to try to divide each number by the previous one to check if they are multiples and if there is a pattern there.

In this type of series, the pattern is not immediately obvious. Normally, the numbers can increase or decrease in the sequences, with leaps that do not seem logical at first.

As the name suggests, these types of series hide an alternating pattern that can contain additions, subtractions, multiplications, and divisions, isolated or in combination. An example of a simple alternating pattern would be 1 - 3 - 6 - 8 - 11. The pattern here is alternating between adding +2 and +3 to the previous number:

More complex patterns can be longer. A good tip is to always check for multiplication or addition when the number increases and for subtraction or division when it decreases.

Intertwined sequences contain two or more patterns independent of each other. In this type of series, there is no relation between the numbers directly following each other.

The longer the sequences, the more patterns they contain, and the longer the jumps between the patterns, the harder it is to detect the rules governing them.

Number series tests tend to include at least one Fibonacci sequence to confuse test-takers. In these sequences, each number is always the sum of the two previous ones. In simple exercises, the sequence tends to start at zero to make it easier to spot the pattern. In harder ones, the sequence can start with any number.

However, there are also exercises based on the Fibonacci logic that do not operate in the same way. For example, each number can be the result of subtracting, multiplying, or dividing the two previous ones. In the case of subtractions and divisions, it also matters which number stands to be divided or subtracted from.

There are two types of number series containing only fractions. The most commonly used in IQ tests tend to follow one of the previously mentioned types of sequences.

The other type is more complicated because it can contain different patterns in the numerator and denominator at the same time or only in one of them.

2 Csapó, B. (1997). The Development of Inductive Reasoning: Crosssectional Assessments in an Educational Context. International journal of behavioral development. 20 (4), 609–626.

This test evaluates the ability to understand the rules governing a Latin Square and the necessary deductive reasoning required to fill the cells and find the positioning of each figure.

This test assesses the ability to combine inductive and deductive reasoning to find the hidden patterns or logical thinking processes behind a series of figures.