A simple deductive argument is a chain of reasoning involving three statements or propositions, where the first two propositions are premises (assumed to be true) and the third one is the conclusion drawn from the premises.

This Verbal Reasoning Test with Syllogisms uses this device because the judgment of such arguments or the correct assessment of statements has been considered a major component of the broader concept of critical thinking1.

For each question, you will be given two statements. You must select the logical conclusion that can be drawn out of these statements.

The validity of the statements in real life is irrelevant and should not be taken into account.

Statement 1: All birds can fly.
Statement 2: Some dogs are birds.

If some dogs are birds and all birds can fly, then the logical conclusion is: some dogs can fly. 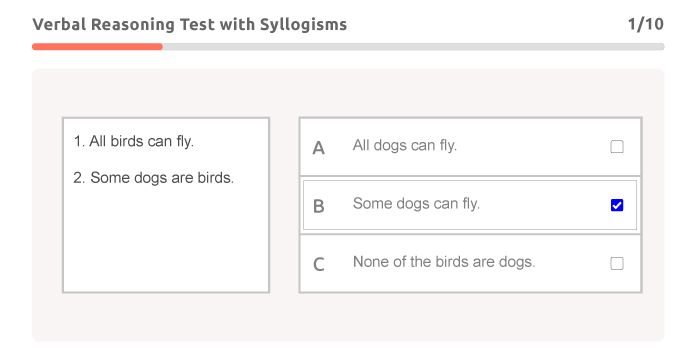 Verbal reasoning tests with syllogisms are psychometric assessment tests that are designed to evaluate a person's deductive and logical reasoning skills. Syllogisms represent a good opportunity to evaluate this ability because they do not involve or require prior knowledge on the part of the person taking the test.

A syllogism can be described as a logical argument with three parts: two premises and a conclusion.

A premise is a statement that is proposed as evidence for an argument. It can be positive or negative and partial or total. The premises with total information include terms such as all, everything, always, nobody, none, never. The ones with partial information usually contain the word "some".

Syllogisms are made up of two premises, one major and one minor. The major premise is the one that contains the broader statement. Normally it indicates that X belongs or not, partially or totally, to a category: All / None / Some X is / are CATEGORY

The most common categories include people (All Xs are humans), objects (No Xs are tables), and animals (Some Xs are horses).

The minor premise is more restrictive in its content. It typically presents a statement related to the X of the major premise. It can also refer to the category, but in those cases, one premise must always be total and the other partial. The partial will be the minor premise.

The conclusion is the statement that results from the relationship between the two premises.

Tips and tricks to solve verbal reasoning tests with syllogisms

Focus only on the arguments of the premises

Verbal reasoning tests with syllogisms do not require prior knowledge, so you are not expected (and not wanted) to use your general knowledge. Their goal is simply to analyze your reasoning ability. It does not matter your level of studies or intellectual development.

In fact, the information present in the premises is rarely related to real life. That is one of the challenges of these exercises: the ability to analyze the information in a totally logical way without judging its veracity.

Try to deduce the answer

Focus only on the arguments of the premises and try to deduce the different conclusions that you can draw from their relationship. Once you are sure of your conclusions, look for them among the possible answers.

Verbal reasoning tests with syllogisms are multiple-choice tests. That is, they present you with alternatives of possible answers and you must select the correct one.

To increase the level of difficulty, these alternatives are written and formulated in such a way that, at first glance, they all appear to be correct. As a result, they often create confusion in the minds of examinees who tend to start analyzing the logic behind each answer instead of focusing on the information in the premises.

Venn diagrams are a representation of the relationship between two or more terms. If you find it difficult to understand how the premises of the syllogism are related just by reading their arguments, drawing these diagrams can help.

While you are drawing them, you are analyzing that relationship in your subconscious and turning it into visual information that may be clearer to you.

1 Jansson, L. (1974). Structural and linguistic variables that contribute to difficulty in the judgment of simple verbal deductive arguments. Educational Studies in Mathematics, 5, 493-505.

This test evaluates visual memory and concentration. A grid partially colored will be shown for five seconds and the test-takers will then be asked to point out the position of the colored cells.

Evaluates inductive reasoning and verbal skills. You will be given short texts that you will have to read and interpret to then demonstrate that you understand the information conveyed.

Assesses the ability to interpret, understand, and process literal information. The test-takers will be asked to determine the contents of different boxes based on the information provided.