The format of this test is rather uncommon, which can be advantageous because tasks that present subjects with intermediate amounts of novelty tend to be good measures of intelligence1. You are asked to infer the relationships between the words on the list and then to choose the best diagram to represent these relationships.

This Logical Reasoning Test has the potential to assess verbal reasoning as well as the ability to cope with relative novelty, which seems quite important to intelligence2.

For each question, indicate which diagram better expresses the relation between the three given words. The relations may not be as straightforward as they seem and you should take your time to think about them. This test has no time limit.

The best way to analyze each relation is to identify the word with a wider meaning and that could possibly encompass the others. Then you should question the relation between the remaining words. For instance:

The type of question may vary depending on the possible relation with the wider meaning word.

Means of transport is the word with the wider meaning. Therefore, you can take it as your base to compare the relation between the remaining words.

Drinks is the word with the wider meaning.

Therefore, the circles of beer and wine do not overlap in any way. The diagram that better expresses the relation between the three words will have a larger circle (Drinks), with two smaller circles inside (Beer and Wine) separated from each other. 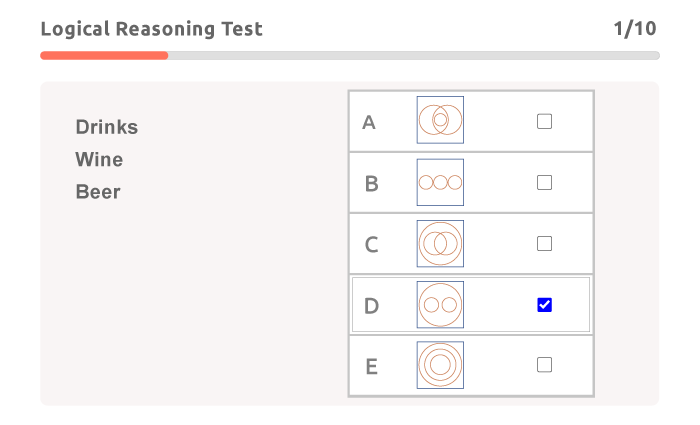 How does this Logical Reasoning Test work?

Venn diagrams are a method to organize the information into a visual representation. In other words, they help to transform a relationship between words and concepts into a graphical representation.

Traditionally, these diagrams use circles or other geometric figures that can overlap or not. Each figure represents a set - a concept or word. The interaction between the figures expresses the relationship between these sets. For example, an intersection between two figures indicates that the sets share something in common.

This test is also designed to evaluate inductive reasoning and, for that reason, each question presents three sets and the test taker must indicate the Venn diagram that best represents the relationship between them. Inductive reasoning implies that the test taker must observe the sets, find a pattern between them and draw a hypothesis that can then be turned into a theory that may or may not be valid.

In practice, for this logical reasoning test, the goal is not for test-takers to test the validity of the theory but rather to express the pattern and hypothesis in the form of a diagram. In other words, the test taker must induce the general connection between the concepts/words to be able to transform it into a graphic representation.

Regardless of the type of test you intend to take, there are universal tips that can be of great help to set you up for success.

Try to solve the question without looking at the answers

On logical reasoning tests, multiple-choice questions are normally designed to be confusing. The goal is to ensure that the test takers arrive at the right answer through reasoning and not solely through exclusion.

This means that some of the possible answers will be very similar and, at first glance, all of them may seem right. More often than not, the test-takers tend to be confused by the similarities and start questioning their own reasoning.

A good tip to solve logical reasoning tests is then to focus on finding the answer by yourself, without looking at the possible answers. Keep your mind clear from any confusion and focus on finding a logical and reasonable answer for the problem. Once you are certain you have it, select the corresponding answer and move on. Do not dwell on the remaining options.

Become acquainted with the test

Even if there is no time restriction to answer the test questions, time is still taken into account at the end to calculate your ranking.

Practicing similar tests or, at least, checking them out before taking the real one can thus be of great help to tackle the time problem. When you do not know what to expect, you need to spend precious seconds getting acquainted with the figures, sequences, or type of information presented, before you can actually start solving the problem.

Practicing logical reasoning tests is a good way to train this skill while also getting acquainted with the questions, but it is not the only way you can do it.

In fact, there are several activities that you can engage in your daily life that do not feel like training but that will help you develop your overall reasoning skills. For example, many puzzle games like sudoku, crosswords, or jigsaw puzzles require that you use logical thinking in order to solve them.

Many other tests designed to assess a dimension of intelligence imply the use of logical reasoning too. For instance, in a reasoning test with syllogisms, you need to draw a logical conclusion of the relationship between two or more statements. In a test with number or figure series, you need to detect the logical rule that governs the sequences.

Practicing different tests can then help you develop your reasoning skills in more than one sphere.

Mental chronometry test. It assesses the reaction time of the test-takers to a stimulus.

This test analyses one’s ability to create a mental image of a given object and the ability to analyze said object to understand how its outlook might change when seen from different angles.

Assesses the ability to interpret, understand, and process literal information. The test-takers will be asked to determine the contents of different boxes based on the information provided.

Assesses the necessary deductive reasoning skills required to understand and complete a Latin Square as well as the ability to work with abstract non-symbolic numerical representations.