Induction is a strikingly pervasive and important function of intelligence1. Evaluating the discourse is one of the elements of verbal reasoning, which is important because language is not just a tool for communication, it is a primary instrument of thought (Burton et al, 2009).

Verbal reasoning is key in learning contexts (e.g. School), since the activity of learning often requires listening and reading, and demonstrating one’s learning is often done via writing and speaking2.

This Verbal Reasoning Test measures your verbal and logic skills. For each question, you will be given a short text of one or two paragraphs and a question related to the written information. You must understand the content of the text and draw logical conclusions to answer the question.

This test contains 10 questions. There is no time limit. 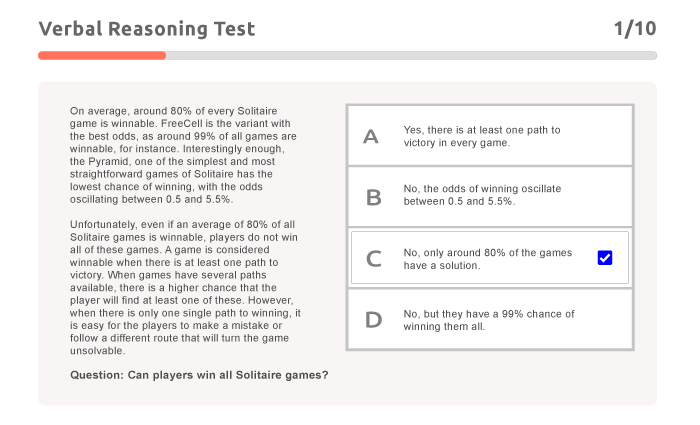 What is verbal reasoning?

Verbal reasoning tests assess the ability to analyze data, interpret what is written, think constructively, and draw precise conclusions based on these processes.

Interpreting a text and drawing conclusions involves deductive and inductive reasoning. In general terms, the first one analyzes general arguments to reach a specific logical conclusion, while the second one departs from specific arguments to draw a possible general conclusion.

Although they assess both types of reasoning, verbal reasoning tests tend to place their emphasis on inductive reasoning. The texts used in the exercises are normally unclear to force the examinee to interpret them in order to understand them. That is, these tests analyze the ability to “read between the lines” of the examinees.

The texts of the exercises are purposely written in a complex and convoluted way. One single reading may not be enough to understand everything that is (and is not) being said there.

Read the passage as many times as necessary until you are sure that you understand it perfectly.

Do not assume anything

Read the text carefully and draw only logical and reasonable conclusions from what is written there.

Inductive reasoning involves assuming a general concept out of smaller and more restricted ones, but it is still a logical process. Do not assume something is one way just for the sake of it. If you think something is a certain way, try to find the justification for that assumption.

In a verbal reasoning test, only your ability to interpret and understand is assessed. Your previous knowledge, level of education, or intellectual development are not important, although they may indirectly influence your skills.

You are asked and expected to be able to interpret the texts literally, without evaluating the veracity of what is written.

Evaluates problem-solving and verbal skills. Test-takers will face a problem (random sets of letters) and will have to solve it by detecting which sets can be reordered to create English words.

Evaluates memory and concentration skills. Test-takers will be shown a sequence of icons in quick succession and must then recall which icons were shown.